The weekend of October 20th I had a long weekend because there were no classes on Friday. I had a few ideas about what I wanted to do. A few of my friends were going to Pai, which is in northern Thailand. It’s supposed to be beautiful but the trip there required a 15 hour bus ride. I hadn’t been to Bangkok yet and I wanted to do a solo trip during my time here so I was excited for the opportunity and booked a bus ticket to Bangkok!

I got off the bus at 4 a.m. on Friday morning and negotiated with the songthaeow driver from 400 baht to 250 baht for the drive to my hostel. When I showed up at my hostel, the bars were up, the lights were off and I could’t see anyone, even though they said they had 24 hour reception. This was the only time on the trip I thought, “What the heck am I doing?” Luckily, I worked it out and I wasn’t stuck on the streets of Bangkok for the rest of the night. 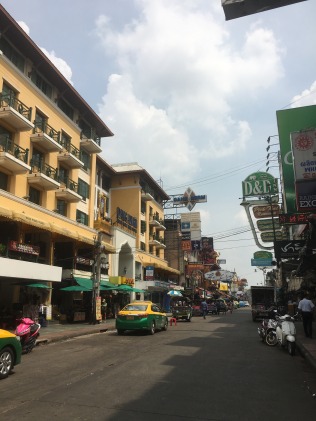 Khao San Road during the day

My first day in Bangkok I spent sightseeing by taking the ferry boat down the Chao Phraya River. I went to Wat Arun (“Temple of Dawn”), a flower market and Chinatown. On the way back from the ferry ride, I walked down Khao San Road. It is well known as the backpacker hub of Southeast Asia. It’s filled with hostels, open air bars with lively music, food vendors and even a McDonald’s. I had phad thai for dinner, which I have to say didn’t compare to my favorite phad thai vendor in Khon Kaen. 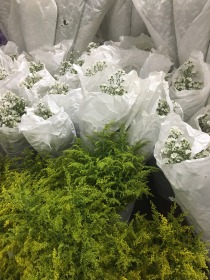 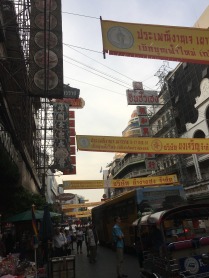 On Saturday I was up early for the drive to go to the train market and floating market. The train market was exactly what it sounds like; it was along the train tracks, which a train actually still takes quite frequently. I was there when it came by and when the vendors heard the train slowly coming, they casually moved their overhangs in and any of the produce that might get crushed. After the train market, I went to the floating market, which is along the canals an hour outside of Bangkok. I took a slow paddle longboat ride around the market.

the train didn’t give much room!

My bus ride back to Khon Kaen was later that night. It was a quick two days in Bangkok but I had enough time to do what I wanted. Bangkok was a very exciting city. I enjoyed my solo trip there and I found it helpful that I had a previous experience traveling alone. It made being in the overwhelming city more manageable. I’ve heard from people that they didn’t enjoy Bangkok, usually for the reasons that it is too busy, it’s too humid to walk around, there’s not much to do or it’s only for people who want to stay in nice hotels with rooftop bars and shop. I wasn’t expecting to love Bangkok but I was pleasantly surprised. I’ve heard it called the “Venice of Southeast Asia” because of the canals coming off of the Chao Phraya River. I wouldn’t go that far but it definitely had some charm mixed in with the hustle and bustle. The temples in Bangkok were numerous and unique; Wat Arun is one of my favorite temples I’ve been to in Thailand. The energy of the city is infectious. Even though I’d been up since 4 a.m., I found myself exploring the city in all my free time. And, of course, the food. I wasn’t looking to go to an expensive rooftop restaurant but I found my 1 USD street or cafe food just as delicious. I could’ve spent a few more days enjoying the variety of food in Bangkok. Looks like it’s worth another visit! 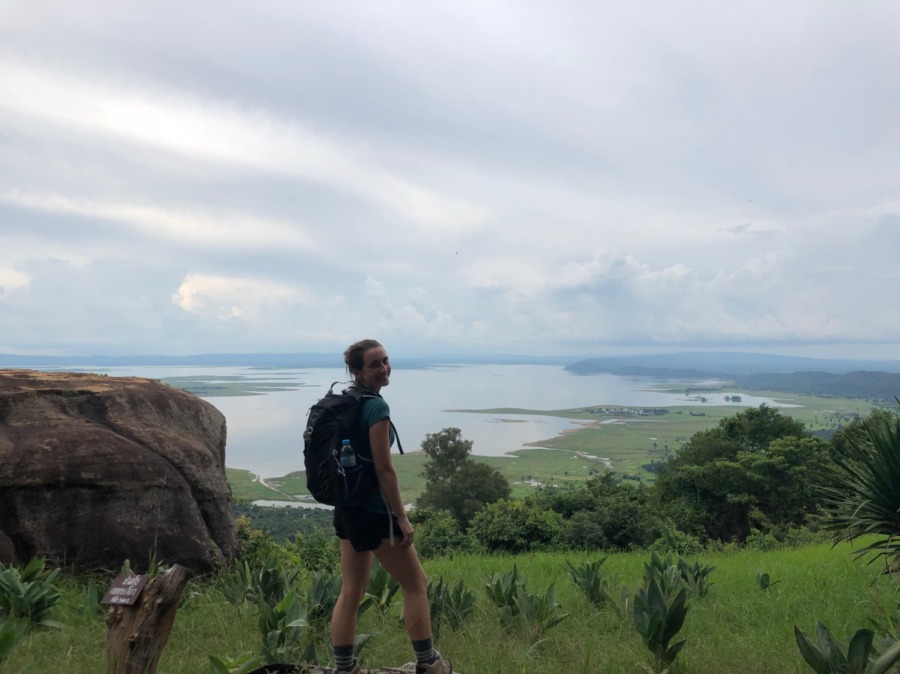 After getting adjusted in Khon Kaen, the last two months (already?!) have been a whirlwind of traveling most weekends, projects and quizzes and staying in the village every other week. Over the last few weeks, I’ve had many short but amazing weekend trips around Thailand.

In the middle of September a group of us skipped out on a weekend in Bangkok and decided to go camping in Nam Phong National Park for a night,isn’t. We stopped at Tesco (the Walmart of Thailand) and picked up a few tents and lots of snacks. Later on we found that a 3 person tent is more the size for a single person. The weekend was spent walking with one of the National Park guides through a trail that looked like it hadn’t been traveled in a while, watching the sunset at a viewpoint and staying there for hours after dark, enjoying the clear skies and stars.

A few weekends after the camping trip, we took a 12 hour overnight bus ride to Chiang Rai. The bus ride was an experience in itself. Getting up to go to the bathroom in the middle of the night required incredible balance to avoid getting thrown into the walls of the 1×1 bathroom as the bus went through the mountains. While we were in Chiang Rai we tried going to a waterfall but it was closed because of rainy season caused currents were too strong. But we made the most of it! There was a road near the entrance to the waterfalls and we followed that for a few miles. We broke a sweat and got beautiful views out of it. We also visited the Wat Rong Khun “White Temple” and Wat Rong Seur Ten “Blue Temple”, walked around the night markets and enjoyed the laid-back nightlife. We got off our bus from Chiang Rai Monday morning and had two hours to pack and get ready for our first week long community stay; another exciting week! 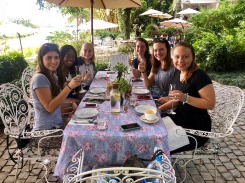 A fancy brunch at Chivit Thamma Da near Kok River

After the spontaneous hike near the waterfall

The next weekend we went right from the community stay to another night traveling on the a bus. This time was to Hua Hin to just chill out on a beach. And that’s just about what I did the whole time. As soon as I got there on Saturday and until the bus to leave on Sunday, I was enjoying the sun and the ocean water that felt more like bath water.

The first weekend in October, CIEE sponsored an overnight trip for the program to Phu Pha Maan National Park. It was supposedly a camping trip but my friend and I were staying in a bungalow with a fan and a bathroom. I’d say it was “glamping”. Once we got there we took a quick hike up to the bat cave. As soon as I got to the top, the bats started swarming out at the top of the cave. Thousands and thousands of them kept on coming out.

The next morning we went on a 3.5 hour hike up the mountains around the national park, led by one of the national park rangers. With a machete, of course. It became clear quickly that this “hike” was more bushwhacking. I didn’t think I could have so much fun while dripping in sweat and branches hitting my face. Along the way, there were a lot of viewpoints that looked out to mountains and rock faces covered in vines, while in the opposite direction there was a vista of green farm land. It looked like a scene out of Jurassic park. We also reached another cave (no bats this time). A few of us decided to explore the cave a little more. We reached where the light from outside the cave didn’t reach and…kept going. We got to an area that opened up and as I shined my phone light around it looked like the inside of a small stadium. We turned our lights off and were quiet for a minute. It was complete darkness with just the sound of the bats, that were probably sleeping before a bunch of humans came in. 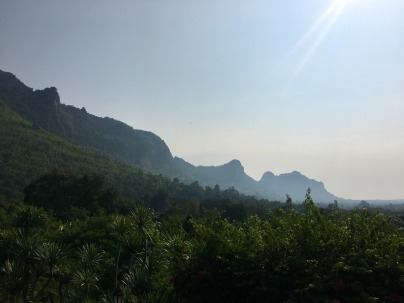 View from the campground